Martino Martini
From Trento to the World 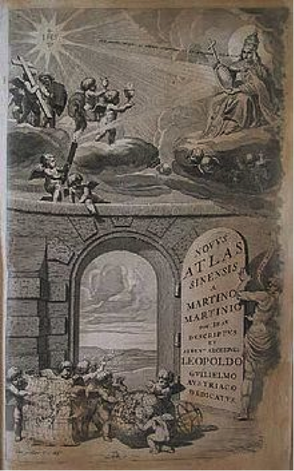 Early years
Martini was born in Trento, in the Bishopric of Trent. After finishing high school studies in Trent in 1631, he entered the Austrian province of theSociety of Jesus, from where he was sent to study classical letters andphilosophy at the Roman College, Rome (1634–37). However his interest was more in astronomy and mathematics which he studied underAthanasius Kircher. His request to be sent as a missionary to China had already been granted by Mutius Vitelleschi, the then Superior General of the Jesuits. He did his theological studies in Portugal (1637–39)—already on his way to China—where he was ordained priest (1639, in Lisbon).
In the Chinese Empire
He set out for China in 1640, and arrived in Portuguese Macau in 1642 where he studied Chinese for some time. In 1643 he crossed the border and settled inHangzhou, Zhejiang Province, from where he did much traveling in view of gathering scientific information, especially on the geography of the Chinese empire: he visited several provinces, as well as Peking and the Great Wall. He made great use of his talents as missionary, scholar, writer and superior.

Frontpage of Novus Atlas sinensis, by Martino Martini, Amsterdam, 1655.
​
Soon after Martini's arrival to China, the Ming capital Beijing fell to Li Zicheng's rebels (April, 1644) and then to the Manchus, and the last legitimate Ming emperor, the Chongzhen Emperor, hanged himself. Down in Zhenjiang, Martini continued working with the short-lived regime of Zhu Yujian, Prince of Tang, who set himself up as the (Southern) Ming Longwu Emperor. Soon enough, the Manchu troops reached Zhejiang. According to Martini's own report (which appeared in some editions of his De bello tartarico), the Jesuit was able to switch his allegiance to China's new masters in an easy enough, but bold, way. When Wenzhou, in southern Zhejiang, where Martini happened to be on a mission for Zhu Yujian, was besieged by the Manchus and was about to fall, the Jesuit decorated the house where he was staying with a large red poster with seven characters saying, "Here lives a doctor of the divine Law who has come from the Great West". Under the poster he set up tables with European books, astronomical instruments, etc., surrounding an altar with an image of Jesus. When the Manchu troops arrived, their commander was sufficiently impressed with the display to approach Martini politely and ask if he'd like to switch his loyalty to the new Qing Dynasty. Martini agreed, and had his head shaved in the Manchu way, and his Chinese dress and hat replaced with Manchu-styles ones. The Manchus then allowed him to return to his Hangzhou church, and provided him and the Hangzhou Christian community with necessary protection.

The Chinese Rites affair
In 1651 Martini left China for Rome as the Delegate of the Chinese Mission Superior. He took advantage of the long, adventurous voyage (going first to the Philippines, from thence on a Dutch privateer to Bergen, Norway,[ which he reached on 31 August 1653, and then to Amsterdam). Further, and still on his way to Rome, he met printers in Antwerp,Vienna and Munich to submit to them historical and cartographic data he had prepared. The works were printed and made him famous.
When passing through Leyden, Martini was met by Jacobus Golius, a scholar of Arabic and Persian at the university there. Golius did not know Chinese, but had read about "Cathay" in Persian books, and wanted to verify the truth of the earlier reports of Jesuits such as Matteo Ricci and Bento de Góis who believed that Cathay is the same place as China where they lived or visited. Golius was familiar with the discussion of the "Cathayan" calendar in Zij-i Ilkhani, a work by the Persian astronomer Nasir al-Din al-Tusi, completed in 1272. When Golius met Martini (who, of course knew no Persian), the two scholars found that the names of the 12 divisions into which, according to Nasir al-Din, the "Cathayans" were dividing the day, as well as those of the 24 sections of the year reported by Nasir al-Din matched those that Martini had learned in China. The story, soon published by Martini in the "Additamentum" to his Atlas of China, seemed to have finally convinced most Europeans scholars that China and Cathay were the same.
On his way to Rome, Martini met his then 10-year-old cousin Eusebio Kino who later became another famed Jesuitmissionary explorer and the world-renowned cartographer of New Spain.
In the spring of 1655 Martini reached Rome. There, in Rome, was the most difficult part of his journey. He had brought along (for the Holy Office of the Church) a long and detailed communication from the Jesuit missionaries in China, in defence of their inculturated missionary and religious approach: the so-called Chinese Rites (Veneration of ancestors, and other practices allowed to new Christians). Discussions and debates took place for five months, at the end of which the Propaganda Fide issued a decree in favour of the Jesuits (23 March 1656). A battle was won, but the controversy did not abate.

Return to China
In 1658, after a most difficult journey, he was back in China with the favourable decree. He was again involved in pastoral and missionary activities in the Hangzhou area where he built a three naves church that was considered to be one of the most beautiful of the country (1659–61). The church was hardly built when he died of cholera (1661). David E. Mungello wrote that he died of rhubarb overdosing which aggravated his constipation.[5]
Travels[edit]Below is a list of cities visited by Martini, traveling in at least fifteen countries in Europe and seven provinces of the Chinese empire, making stops in India, Java, Sumatra, the Philippines and South Africa. After studying at Trent and Rome, Martini reached Genoa, Alicante, Cadiz, San Luca de Barrameda (port near to Seville in Spain), Seville, Evora andLisboa (Portugal), Goa (in the western region of India), Surat (port in the northwestern region of India), Macao (on the China’s southern coast, administrated by Portugueses), Guangdong (the capital of Guangdong Province), Nanxiong (in northern Guangdong province, between the mountains), Nanchang (the capital of Jiangxi Province), Jiujiang (in northwestJiangxi Province), Nanjing (the capital of Jiangsu Province, olim Jiangnan Province), Hangzhou (the capital of Zhejiang Province) and Shanghai, traversing the Shandong Province he reached Tianjin and Beijing, Nanping in the Fujian Province, Wenzhou (in southern Zhejiang Province), Anhai (a port in southern Fujian), Manila (in the Philippines),Makassar (Sulawesi island in the Dutch Indonesia), Batavia/ Jakarta (Sumatra island, capital of the Dutch Indonesia),Cape Town/Kaapstad (a stop of twenty days in the fort, the Dutch Governor Jan van Riebeeck had built in 1652), Bergen,Hamburg, the Belgian Antwerp and Bruxelles where he met the archduke Leopold Wilhelm of Austria, the Dutch Leiden(with the scholar Jacob van Gool aka Golius) and Amsterdam where he met the famous cartographer Joan Blaeu, almost certainly some cities in France, then Monaco di Baviera, Vienna and the Hunting Pavilion of Ebersdorf[disambiguation needed](where he met the Holy Roman Emperor Ferdinand III of Habsburg), and finally Rome. For his last journey (from 11 January 1656 to 17 July 1658) Martini sailed from Genoa, to escape the pirates repaired Islands Hyeres on the French Riviera, to Alicante, Lisboa, Goa, the Portuguese colony of Larantuka in Flores Island (Indonesia) resting over a month, Makassar (where he met a Dominican friar, Domingo Navarrete), Macao, and finally Hangzhou, where Martini died. [6]
​
Post-mortem phenomena
According to the attestation of Prosper Intorcetta (in Litt. Annuae, 1861) his body was found undecayed twenty years after; it became a long-standing object of cult not only for Christians, until in 1877, suspecting idolatry, the hierarchy had it buried again.[7]

Contemporary appreciations
Today's scientists are more and more interested in the works of Martini; he is acclaimed as the father of Chinese geographical science. During an international convention organized in the city of Trento (his birthplace) a member of the Chinese academy of Social Sciences, the Professor Ma Yong said : "Martini was the first to study the history and geography of China with rigorous scientific objectivity; the extend of his knowledge of the Chinese culture, the accuracy of his investigations, the depth of his understanding of things Chinese are examples for the modern sinologists". Ferdinand von Richthofen calls Martini "the leading geographer of the Chinese mission, one who was unexcelled and hardly equalled, during the XVIII century…There was no other missionary, either before or after, who made such diligent use of his time in acquiring information about the country". (China, I, 674 sq.)

Works
A European artist's impression of a Manchu warrior devastating China, from the title page of Martini's Regni Sinensis a Tartaris devastati enarratio. Modern historians (e.g. Pamela Kyle Crossley in The Manchu, or D.E. Mungello) note the discrepancy between the picture and the content of the book; e.g., the severed head held by the warrior has a queue, which is a Manchu hairstyle (also imposed by Manchu on the population of conquered China), and is not likely to be had by a Ming loyalist 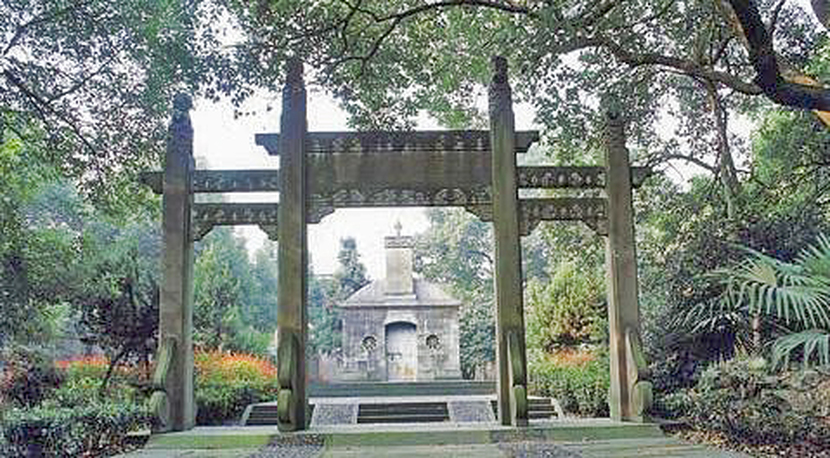 More about the City of Hangzhou? 5 things to do in Hangzhou
see the Video